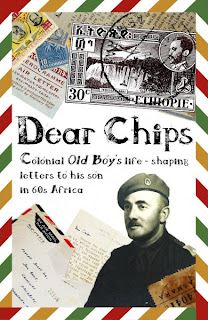 ‘A little advice from Papa will not come amiss’

So writes ‘the Old Boy’, working in the Colonial Service in Ethiopia to his son ‘Chips’, leaving Scotland for a life in the Rhodesian police (BSAP) in March 1963.

It was certainly a life-shaping letter, extolling variously on God, moral values, manners, healthy living, women, and what to do if in ‘a spot of bother’. And it befitted the man, Norman Blake, then in his 60s, who wanted more than anything for his son, Fraser, to ‘have a good name’.

Of exceptional integrity and discipline, ‘the Old Boy’ moved in diplomatic circles, was an accomplished oil painter, scratch golfer, expert sea angler, and twirled Indian Clubs each day to keep fit. Within a fascinating correspondence of over fifty letters, he also guides Chips through African ways (he, too, having served in the BSAP), local politics and world politics, whilst making sure he acquired Savile Row suits and handmade shoes.

Fraser Blake, who had grown up in Eritrea, saw relatively little of his father in the decades that followed. But he always kept those precious airmails.

This book records his reactions to the ‘Old Boy’s’ well-intentioned and thoughtful (if a trifle Edwardian!) suggestions both at the time, and now 40 years after his death. Especially intriguing are the comparable experiences of horseback and motorbike patrols to native kraals and crime scares deep in the African bush. Also insightful were their contemporary views of moves towards Rhodesian independence.

In a touching ‘imagined’ letter to the ‘Old Boy’ written in 2013, ‘Chips’ apologises for where he thinks he let his father down. In an ironic twist he regrets not having written more regularly at the time.

Do dads any longer take the trouble to micro-manage the attitudes and life-stages of their young adult offspring? Well, the ‘Old Boy’ certainly left us with a model approach to so doing, and Fraser Blake is glad he did.

As sold in Shakespear Bookshop, Paris